Projects It is Spring in the Garden

It is Spring in the Garden 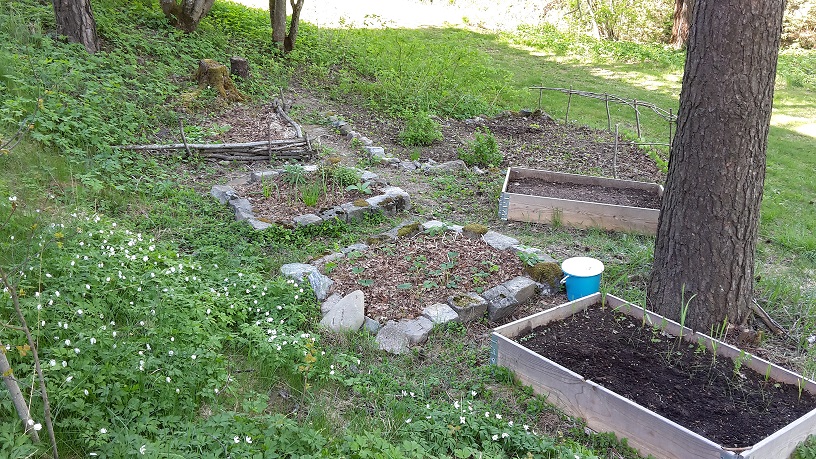 Here is a short update on the permaculture garden after the first winter. It seems like almost everything has survived – including the bishop’s weed! My improvised fence fell down, but it didn’t take long to fix it. I’ve added some new elements and continue working where I left it in the fall. We have had a cold and long spring, only at the beginning of May the weather warmed up a bit.

The first two raised beds I made looks fine. The strawberry plants in the strawberry bed are growing and my peppermint plant has put on several new shoots. In addition, it seems like the lovage did survive after all. Last fall I thought it died because the slugs finished off all the small leaves. In the fall I also planted some garlic in with the strawberries. However, I then read that they are not companions and should not be planted together. So now when the garlic started growing I quickly transplanted them into my herb bed instead.

The herbs are also doing ok. The lemon thyme is growing and flowering, the same is the welsh onion and the chives. The winter sar is not looking too happy. I’m not sure why, but it doesn’t seem to like it in that spot. This year I have bought an oregano plant and a salvie plant and added to the herb bed. In addition, I’ve planted out one of the borage plants that I’ve been growing from seeds collected last fall. 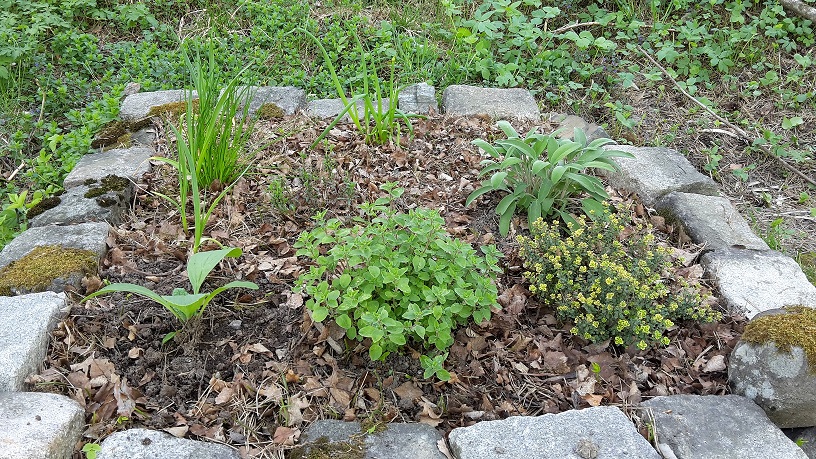 The rhubarbs are not doing all that great. Early this spring it seemed like one of the four plants had survived. But now there are also two smaller once coming along. So I have one that is ok, and two that are very small and very late. I have six new seedlings growing on the balcony, so as soon as they are big enough they will also go outside. I’ve also sown some calendula seeds along the edge of the rhubarb bed to get some colour in this part of the garden. They are just starting to sprout now.

In addition, I have added two more raised beds. In one of them I’ve planted garlic and leeks. Then I have sown seeds form radishes, lettuce, spinach, beets and some more calendula. In the other one I have for the moment just sown some beans. I have chosen an early variety that should sprout already at five degrees Celsius. So far I haven’t seen anything coming up. It will be very interesting to see if those will do ok or not. In addition, I will plant another variety of beans and some peas here.

The raspberry and gooseberry shrubs are doing fine in the open area towards the front. The gooseberries already have flowers on them! Along the fence of this area I’ve planted some nasturtiums, both young plants started inside and seeds. Hopefully this will reinforce my fence illusion and create a nice looking border. I have also planted a small red current cutting in this area and some more of the early beans. In addition, I have several plants on my balcony that I will plant out as soon as they get big enough. Hopefully this will be within the next couple of weeks.

I am getting huge amounts of bishop’s weed over this entire area. Not so much in the raised beds, but in the open bed there is very much of it. I have harvested some of the smaller leafs and used for tea and for cooking. The larger leaves I am just cutting and dropping and using as mulch.

Here is a video I made of the garden in April this year.